DroneArt Helsinki! was an event organized in collaboration with Wikimedia Finland, Maptime Helsinki and AvoinGLAM, where we experimented with bringing public artworks and statues into the open through Wikimedia sites. At the same time Wikimedia Sweden’s Jan Ainali, John Andersson and André Costa were visiting us. The aim was to phtograph statues with drones, place them on a map and model in 3D.

We put together a great program of presenting  public art in Wikimedia. Heikki Kastemaa opened the event by describing writing about public art in Wikipedia. According to him, there is no established method for it, but often articles about public art contain some or all of the following: description of the artwork, the provenance and reception. Images of the artworks are intended to communicate information about the works.

John Andersson told about the Wiki Loves Public Art project that was initiated by Wikimedia Sweden. Thanks to the project, our colleagues in Sweden have been able to gather a public art database covering the whole country. André Costa was presenting productions that were created around the project.

The database has been turned into the Offentligkonst.se map service. In another project images from Wiki Loves Monuments and Mapillary have been brought together.

Finland and Sweden have basically similar copyright legislation based on the pan-European practice. A work of art is protected with copyright 70 years from the death of the artist. Replication of the work, images or 3D models are not allowed to be distributed freely. Works placed permanently in the public space are an exception, but this exception is dealt with slight differences in different EU countries.

The exception is called the Freedom of Panorama. In Finland all artworks placed permanently in public space or in it’s vicinity are allowed to be photographed freely, but the images must not be used commercially.

In Sweden the copyright organization BUS has required compensation from Wikimedia Sweden for publishing images in the Internet, based on the claim that the database can be used free of charge and the distribution of images is in large scale compared to traditional printing of postcards. Wikimedia Sverige and BUS case is in Supreme Court. (Mikael Mildén, Konstnärer stämmer Wikimedia, Fria Tidningen 26.3.2015)

In addition, the images stored in Wikimedia must comply to the copyright legislation in the originating country and the United States. Because of this even more images fall outside Wikimedia Commons.

In the Finnish Wikipedia images are stored locally and they can be used according to Finnish copyright law based on the right to quote, in the respective article of the artwork.

Represenatives of the Wikimedia movement strive to affect the current changes in copyright legislation in Brussels, and one of the most important reforms is the unification of freedom of panorama. Local representatives are welcome for this work.

We wanted to try out many different ways to photograph the statues to create the 3D models.

The statues is photographed from all sides with many images. A drone or a long monopog helps in reaching the heights. All corners of the statue must be explored with different shooting angles.

The weather forecast promised stormy wind and rain. There were clouds in the sky. The drone was tossed around by the wind, but finally we went happily back to our workshop with plenty of images. 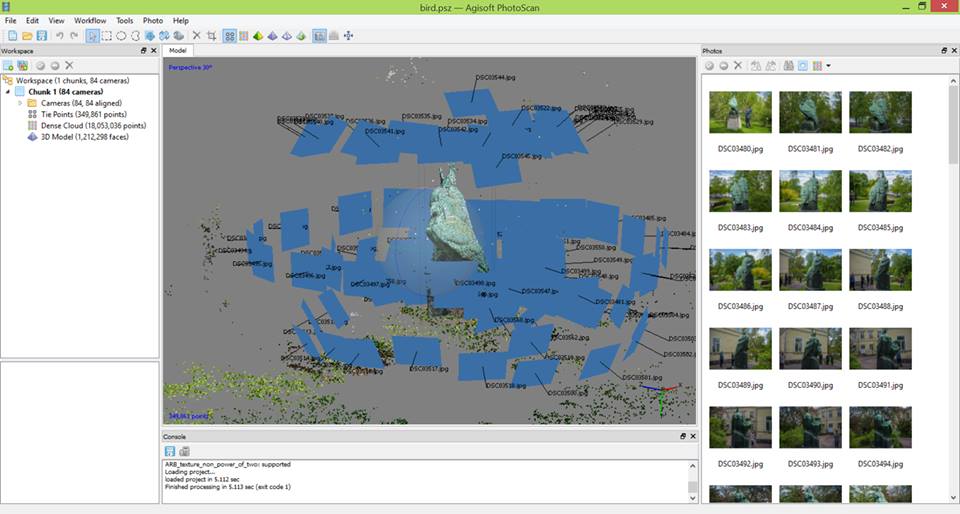 As a result of working with different Structure from Motion programs, we were happy to note that the stormy clouds were not the only clouds: we managed to create a point cloud! A point cloud is a computer generated 3D model that consists of points situated in 3D space. Comparing different images taken from different angles, matching points can be found and they are mapped into 3D space quite as mystically as surveyors reveal distances.

The point cloud was further elaborated into a polygon mesh, out of which a 3D printer was able to create an object. We shall attach the image here as soon as we get it. The copyright of the work has expired. The artist is Bertel Nilsson, and the work is Eagles, made in 1913.